For years now, I've been using Toodledo as my task management tool, both for work and home. But work is increasing our security posture and has tightened down on "shadow IT", those systems and tools not owned and managed by the organization. That's a good thing... but Toodledo, and the Zapier integration I used to automate its interaction with GMail, aren't part of the allowed ecosystem. As a result, I find myself switching to Asana, which IT has sanctioned for use. I've just finished my first business week with Asana and here's what I'm encountering...

tl;dr -  Moments of 'this is nice' interspersed with stretches of stabbieness.

Foundationally, there's a difference in the primary use cases of the tools. Toodledo is a task manager first and foremost. There are business and collaboration features, but they were not part of the base of the product. Asana, in contrast, feels like a project management and collaboration tool first and that its task management feature grew out of that. For me, the direct manifestation of this is that Toodledo provides a lot of features to support a GTD workflow but Asana does not. I'm resistant to changing my tool set at all. So the idea of changing my whole task management approach (i.e., not using GTD) is just not viable for me. So I'm trying to hack GTD onto Asana... what I have so far is viable-ish but it's definitely a hack.

I'm going to assume if you're reading this you hava a familiarity with GTD but, in case you don't, the tl;dr is that it  centers around (IMO) two main principles: ubiquitous capture of tasks and a framework for deciding the most relevant task to work on at any given point in time. If you haven't read the book, do. A lot of the websites you'll read make it seem kind of cult-ish, but it works.

This is the the part of the process where Asana does the best. The mobile app is pretty user friendly, it has plugins for Slack and GMail (and a bunch of others that I don't really care about), there's even an Alfred plugin (though it might use some work).

The downside is that GMail plugin is slow as hell compared to the Toodledo-Zapeir integration I used, which created Toodledo tasks when I starred an email in GMail. It's not awful but it is noticeably slower.

Task prioritization is really where Asana falls down. As I said before, GTD is not an in-built consideration in Asana and the best approximation I've been able to achieve is to add sections to the My Tasks screen to mimic the main work statuses in GTD, which you can see in the screenshot below. There's not even a lot of good detail on how to implement GTD in Asana. The best likely guide I've found is a $10 guide published by the GTD association, but from the summaries I've been able to find on it they're pretty much doing what I have. What I have works, but it's a lot more manual movement of tasks around than I had to do with Toodledo.

A key feature of Toodledo is its Hotlist, a user-definable list of tasks that are the most important. For me, that list is populated with tasks that are due that day or that I have selected as things I'm going to do that day by starring them in Toodledo. But the important thing here is that Toodledo populates stuff into this for me automatically based on rules I set for it.

In Asana, I'm having to move tasks into this manually. Asana has a Rules feature, but it's reallllly  limited in what it can do. The screenshot below shows the triggers you can use on tasks in Asana with custom rules, which they consider a Premium and higher feature. You'll notice some stuff about the available rules which are just plain odd. For instance, there's a "task is no longer blocked" trigger but not a "task becomes blocked" trigger. So I can, for instance, add a rule that moves a task into the Next Actions section when it becomes unblocked, but not a parallel rule that moves it to the Hold section when it becomes blocked. 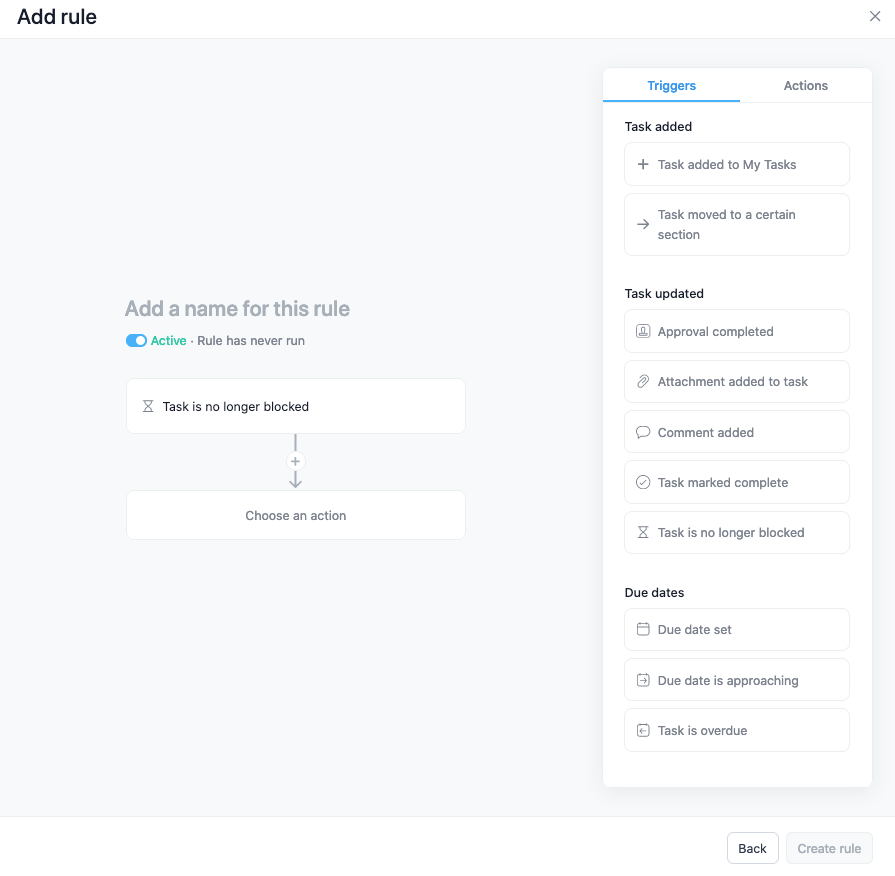 Another thing I'd like to automate is moving a task to Delegated when I assign a user to it, but a) there's no assignment trigger in My Tasks like there is in Asana's projects, b) you can't wildcard the user in that rule, so you can only trigger the rule for a specific user, and c) a rule in a project apparently can't move a rule in the My Tasks list.

Finally, before I wrap this up, a few thoughts about dates in Asana (these are the things that make me the stabbiest, so far):

1 - Asana has task start and due dates and uses the due date for rules. But, the "due date is approaching rule" apparently only fires when the boundary threshold is crossed. So if you set it to move a task to your "hotlist" 3 days before the task it due, but you create a task that is due within 3 days, the rule never fires. If a dev working for me implemented a feature this way, I'd send it back to be reworked.

2 - Asana's start date is displayed on the calendar view of tasks, but doesn't impact it's visibility in the list view. So, for example, I have a Daily Review task in Toodledo that has a start and due date of that date and recurs daily from completion. When I complete today's review the start date for the next iteration is tomorrow and, because it starts in the future, I don't see it in my lists until tomorrow at which point it magically appears. Asana doesn't work like that. The same task set up the same way in Asana creates a new instance in my task list with a start ate of tomorrow even though there is by definition no way I can achieve that task until tomorrow.